Chlamydia is a common and curable infection caused by the bacteria chlamydia trachomatis.

In the United States, chlamydia is the most common bacterial sexually transmitted infection (STI), particularly among sexually active adolescents and young adults. In 2015, a total of 1,526,658 chlamydial infections were reported to the Centers for Disease Control and Prevention (CDC). However, it is estimated that almost 3 million cases actually occurred and as many as one in 10 adolescent females test positive for chlamydia.

Annual testing for the infection is recommended for all sexually active women age 25 and under. Yearly testing is also recommended for women over age 25 who have risk factors for chlamydia (e.g., those with new partners and those with multiple sex partners).

Chlamydia can cured with a simple antibiotic, however, if left untreated, chlamydia can lead to complications such as PID and, potentially, infertility. A person is able to transmit chlamydia to a partner from the time they become infected until treatment is completed. 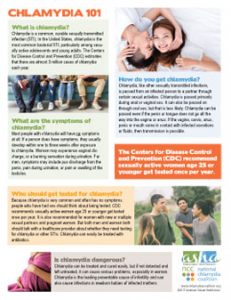