2019 was another record year for STDs. According to the Centers for Disease Control and Prevention (CDC) rates of reported STDs rose for the sixth straight year. Young people continue to endure a big share of the STD burden. About half of the 20 million cases of STDs each year are in people ages 15-25.

Chlamydia is the STD most commonly reported to CDC—about 1.8 million cases in 2019, a 19% rate increase since 2015. Young women ages 15-24 account for nearly half of these cases. Yet, chlamydia and gonorrhea frequently have no symptoms. Without diagnosis and treatment, they can cause serious complications such as pelvic inflammatory disease and infertility. Given the potential health problems CDC recommends annual testing for sexually active women under 25 be tested.

Yes Means Test, a campaign from the American Sexual Health Association, addresses the need for testing. We aim to reduce the stigma around STD tests. YES Means YES has become a sexual empowerment movement. It’s about the right to make your own choices about sex—and have those choices respected. The Yes Means TEST campaign aligns with that movement, empowering people who say “yes” to sex with an understanding of the rights and responsibilities that choice carries. YES means TEST helps steer the conversation: “Yes” to sex, means “Yes” to getting tested.

Bringing YES Means Test to Your Campus, Clinic, or Office

The approach of YES Means TEST is to make the STD conversation NBD (or no big deal) in a way that is authentic and engaging to teens and young adults. Using attention-grabbing statistics as conversation starters, the campaign educates young people on compelling reasons to get tested and drives them to take action.

The YES Means TEST materials on this page can be downloaded, printed and shared in your waiting room, at your health center, or around campus, to raise awareness about the need for STD testing and advance exam room conversations with healthcare providers. 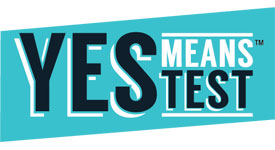